Villa Pennisi was originally a hotel: the Grand Hotel de Bains.
Designed by the architect Mariano Falcini, who also designed the spa, the hotel, with its splendid Italian garden, had a period of great splendor and included among its illustrious guests the royals of Italy and Wagner. His activity was greatly reduced during the Great War and was later used as a home for the Baroni family of Floristella. The hotel, together with its park and the thermal establishment, was part of a large entrepreneurial project developed by the Baron Agostino Pennisi di Floristella. Using its vast land and properties and taking advantage of the presence of the railway station, the Barone concentrated part of its interests in this area, building the baths and the hotel with their park, the large oenological and citrus plant, various buildings that the great new square, called precisely Piazza Agostino Pennisi. It was also built the castle, which was to be the seat of the already famous numismatic collection and the “business center” of its many activities of the Baron. All these buildings were however destroyed by a fire in 1880 and were subsequently rebuilt and renovated. The spa was sold to the Sicily Region in the early 50s, while the hotel became the current Villa Pennisi, now used as a private residence. 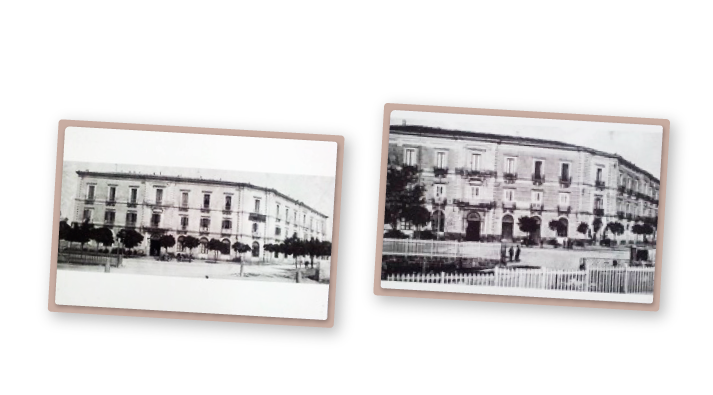 For its beauty, hospitality and extension, the Villa Pennisi Garden is ideal location for cocktails, receptions, weddings and celebratory and commercial events. Recently annexed to the Villa Pennisi hatu ‘, the acoustic scenography ReS It is ideal for hosting musical groups and concerts.

the garden of Villa Pennisi is one of the few ancient gardens that have resisted the assaults of building speculation: in fact it has managed to keep it intact in its structure and in its original dimensions. The task of designing the garden was entrusted to Mariano Falcini, creator of the whole body of Villa Pennisi, who wanted to impress a classic plant, with paths bordered by high hedges of box and large flower beds, but also wanted to insert the plants of origin tropical that you can still admire; without neglecting, however, typically Mediterranean essences, which create a particularly attractive and full of charm. Thus, centenary palms (Washingtonia, Chamaerops, Poenix) or gigantic Yucca, Strelitzia, Guaiabo, Cycas, Jacaranda, Chorysia, surrounded by more familiar walnut, maritime pine, mulberry meet the visitor. Today, the imposing hedges of boxwood have surrendered their role to more delightful borders of Chlorophytum elatum with variegated leaves; while the lawn of Dichondra makes the path between the various flowerbeds homogeneous and bright, highlighting, together with the overall design of the garden and the wide open spaces among the impressive arboreal groups from the recent renovation. also the hydrangeas, the clivie, the hibiscus, the lantana, the roses, the datures. The focal point of the garden is a magnificent wrought iron gazebo with its elegantly designed wisteria-like grid, and the cobblestone floor arranged in geometric shapes, surrounded by blue agapanthus, rose bushes, Macrantha geraniums or from colored Dimorfoteca. Further on, a round basin exhibits an ancient terracotta fountain depicting two children playing, and hosting water lilies, papyri, lotus flowers, while it is surrounded by maidenhair and groups of rustic ferns. You will come a little further on in the spectacular sculpture of an impressive group of Phoenix reclined with the astonishing design of its long and flexible trunks that stretch and twisting, spreading out in daring doodles. Farther down, covered with hibiscus and surrounded by box hedges, the tiny rooms where wild animals were housed, while an ancient aviary materializes shortly after entering with its pagoda shape; continuing, then, along the narrow path that winds from the marble staircase from which you enter the garden, you come across a second pool, bordered by a beautiful wrought iron railing, while, to embellish the portion of wall that serves as background, you can still see the remains of an ancient pictorial and plastic decoration, now unfortunately almost completely lost. Not far from the pool, awaits to be restored a precious structure characterized by a “Greek cross” plan, inside which still can be glimpsed, inside the panels that occupy the walls, the large painted canvases, representing elegantly dressed female figures, the wooden comics carved with flowers and fruits to surround the family’s insignia, and the wrought iron barriers with a magnificent design: this is the small, harmonious and harmonious building where the ladies of the time gathered to take tea, whose The roof is artificially covered by a cascade of lava stones, to simulate the remains of an ancient eruption, and to bring out the protection collection of the female “temple” against the natural dangers of the nearby volcano. Next to it, a small wrought iron staircase leads to a “belvedere” placed at the height of the roof of the building, from which the eye once swept up to the majestic Etna.

The Garden of Casa Pennisi is included in “Grandi Giardini Italiani”, an excellent network that brings together the most beautiful gardens that can be visited in Italy. On the ground floor, with an independent entrance that leads from Piazza Agostino Pennisi and another entrance from the garden, the Hall, of about 200 square meters, is minimally furnished with sofas and mirrors that bring out the stuccos and large sails. It lends itself to conventions, meetings, dance evenings, cultural and commercial events, being able to use a newly renovated kitchen area that is relevant to it.